The GIANT International Internship Programme and its predecessor the MINATEC Summer Program in figures:

Have a look at our alumni’s videos

« Being a part of MISTI France has given me the opportunity to gain insight and knowledge into a world that was previously unknown to me. I learned so much during my time here, especially due to working in a clean room every day and being a part of a foreign environment. Coming to France for the summer has been the most exciting, adventurous, and liberating learning experience and I am so excited for the knowledge and connections it will bring into my future. »

« I liked the lab I was placed in. I developed a good relationship with my mentor and was able to learn a lot of techniques. I liked the freedom the lab gave me. I was able to travel all over Europe and North Africa. I also liked the proximity of the mountains and beautiful hiking trails. I appreciated the public transportation, which is rare in America. I liked the large student population in the city. I was able to make a lot of friends from around the world. »

Why did you choose to stay in Grenoble for your research?

The initial internship was only for two months. I received money from both LSU and EMBL for those two months. I chose to stay in Grenoble because I liked the adventure it afforded me. I wanted to see how long I could last in a foreign environment. I wanted to travel and see as much of Europe as I could. I also wanted to get a publication to make myself a better candidate for grad school. My stay was extended multiple times. My project was progressing well and my supervisor wanted me to stay to finish it.

If you had something to say to the future interns who come to Grenoble, what would it be?

I would tell them to step out of their comfort zone. I have seen two groups of Americans come and go and they both created this little American bubble where they were safe from the strange French world outside. I started out of in this bubble as well, but I didn’t really realize it until it was gone. The bubble was a bit like being one of those tourists that get into those big, comfortable, air-conditioned buses and only see beautiful thing through the windows. It is a richer experience when you set out of that bubble and immerse yourself into a new culture.

« The GIIP program enabled me to do research at a high level in an international setting. I am extremely grateful for everything my colleagues and friends have done for me in France and look forward to keeping the connection. Grenoble is a fantastic place to do high class research and I strongly encourage those interested to pursue this awesome opportunity. » 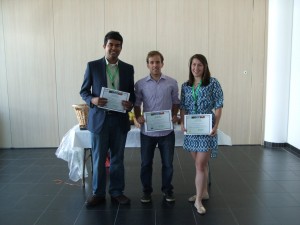 Where were you and what did you do before you came to Grenoble the first time?

How did you find out about the program, and why did you choose to come to Grenoble?

« I found out about the program through UPenn. I wanted to be a global researcher. I also wanted to see how different countries conduct research and thereby learn a different approach to doing science. »

Can you describe a typical day in Grenoble?

« I work from 9-5. My colleagues and I usually meet for dinner and drinks after work. Some days we schedule social events such as laser tag, poker night, movie night, bowling night, etc. I usually end my day drinking coffee on the balcony overlooking the mountains. »